Bengaluru traffic cops are going crazy over the average vehicular speed within the city as it has hit an all-time low of four kilometres per hour. They are now planning to have dedicated bus lanes but no one knows whether it will help at all or not. After having dedicated auto lanes, now it’s time for bus lanes. First, the bus lanes will appear on certain stretches of the city and will be expanded later. The jurisdictional police have already been alerted about the bus lanes that will come up first at three places in the city.

The lane belonging to the CBD will come up on Rajaram Mohan Roy Road, starting from Richmond Road till Pallavi theatre, next to Hudson circle. The second lane will be introduced on Old Airport Road between Suddaguntepalya and Pai Layout. The third lane will become functional from Silk Board Junction to Madiwala Traffic Police Station. The lanes will be used by KSRTC, BMTC and private buses. The sole reason behind this move is to ease traffic woes that have been plaguing the city. 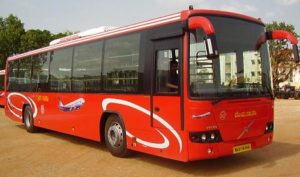 In 2016, the average speed was about six to seven kilometres per hour. The city traffic police have identified that the dropping average speed is because of the BMTC buses that are often driven haphazardly without adhering to lanes. Many a time, they are parked in the middle of the road clogging other vehicles. The city police have already procured barricades for the bus lanes. Simply painting the roads with yellow to demarcate the bus lanes will not be enough. Barricades are a better solution.

The police have already started to stop and move the buses in the lanes. Deputy Commissioner of Police (traffic-north) Renuka Sukumar has said that barricades are currently required only in Hebbal and it’s already in practice. Earlier, BMTC had mooted the idea of bus lanes, especially on Old Airport Road and Whitefield, to reduce travel time and ensure speed pickup. The proposal did not find many takers. Traffic expert JM Chandra Kishan however pointed out that the barricades can be installed only on certain roads as they haven’t been planned scientifically.